QuickBuild integrates tightly with issue tracking systems to provide an integrated view of issues, builds and SCM changes. For a particular build, one can easily know which issues are fixed in it, and which issues are related to it. And for a particular issue, information such as corresponding builds, related SCM changes, and all touched files is at your finger tips. A set of issue commands are also available to update issue statuses directly in SCM commit messages to make developer's life easier.

Issue keys in SCM commit messages are transformed to issue links following which the issue detail page will be opened in issue tracking system. Issue description will also be displayed if mouse is pointed to the issue.

Resolved and related issues of a build

Issue panel displays all resolved and related issues of a build. This issue list can be collected from SCM commit messages, tasks associated with relevant change sets, or specified issue filters. After build finishes, you may edit this list to link new issues or unlink existing issues if necessary. You can even compare to arbitrary builds in the configuration to get all relevant issues.

Create issues under certain conditions and assign to certain persons. For example, you may configure QuickBuild to create an issue for build failure and have it assigned to build engineer, or create issues for unit test failures and have them assigned to corresponding developers.

Manage build versions, either by issue tracker, or by QuickBuild 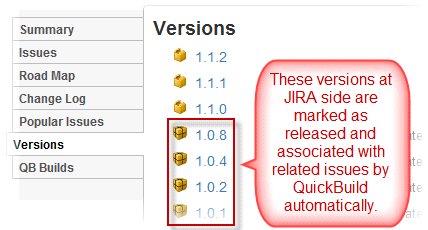 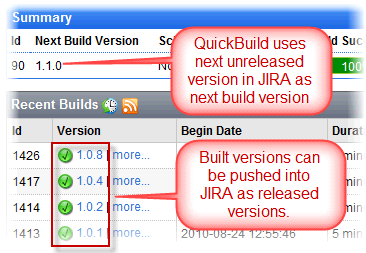 A set of customizable commands can be used in SCM commit messages to update virtually everything of the issue, including issue status. The developer no longer needs to resolve issue manually from issue tracking system, and worries about which build the issue will be integrated in. QuickBuild automatically does this job when next build happens. For example, if you commit your changes with below message:

then, QuickBuild can change issue QB-235 status to resolved or closed (all depends on how you define your commit commands). Read more about issue commands on our wiki.

QuickBuild can be configured to update relevant issues to reflect the builds they got fixed in, in multiple levels. For example, issue watcher can now get to know the first dev build, QA build or release build containing the issue fix as soon as they are available in QuickBuild.

For some issue tracker (JIRA), the QuickBuild plugin can be installed, so the builds and changes for a specified issue can be displayed like below:

and can view recent builds of a JIRA project like below: