QuickBuild is designed to manage the whole build lifecycle. While developers can benefit from proof build and continuous integration, testers can benefit from QA build delivery, and release engineers can benefit from an automated software releasing procedure. With QuickBuild, builds can be delivered smoothly from developer to tester, and from tester to customer, in an automated, predictable and repeatable manner. During this process, arbitrary additional workflows can be applied to builds, and builds can be configured to be only accessible to certain role at certain stage. The build pipeline visualizes this process and tells which build and deployment stage a certain commit is in.

Push commits to different build and deployment stages via pipeline

A set of builds can be connected with promotions to form a build pipeline. It visualizes different stages in a build or deployment process with commit information displayed on each stage. Defined promotion actions can happen automatically or manually on the pipeline to push commits going through different stages to complete its life cycle.

Builds can be marked as recommended to set it apart from other builds. For example, QA team can be assigned with the build recommend privilege and they can recommend passed QA build to mark it as gold build. QuickBuild can be configured to only promote recommended builds to next stage, manually or automatically.

By defining appropriate promotions, appropriate actions can appear on appropriate builds when visited by appropriate users. For instance, a release promotion can be configured so that release engineers can see the release button on a recommended QA build. When press the release button, artifacts of the QA build can go through additional workflows to tag the SCM for current release, publish artifacts, notify interesting parties, or deploy the artifacts to desired environment. 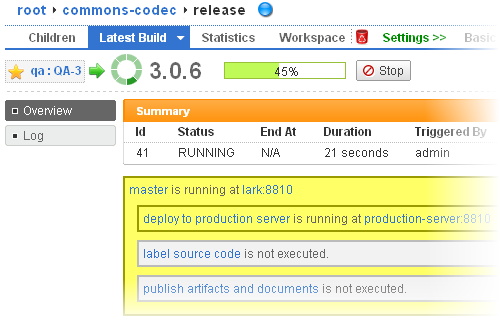 One can compare two builds to get source changes between them, either organized by commits, or by changed files, and view these changes directly within QuickBuild. This provides a convenient and powerful way to identify problem. For example, if some functionality is not working properly in current build, while it was working in a previous build, you may compare these two builds to know which files are changed and who has made these changes. 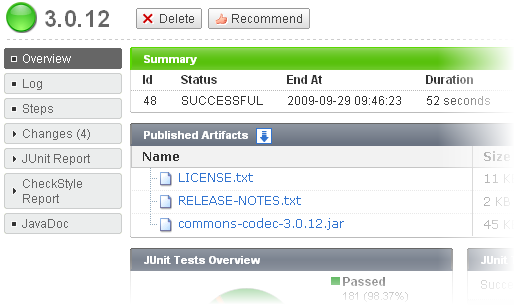 Build artifacts and project documentations can be optionally published to QuickBuild artifact repository, and they can be accessed from QuickBuild web interface with permission control applied. Published artifacts can also be accessed by other projects to use as dependencies during the build process.